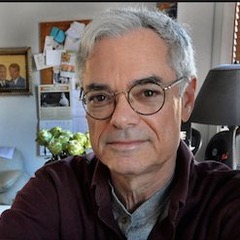 “There are volumes of scholarly works on the Civil Rights Movement, but this book is different. By tracing the two women’s journeys, . . . often in their own words, Margolick artfully lays bare [their] emotional and mental wounds and struggles, [and] also places the women in the context of the wider civil rights era and beyond. . . . This work is simply a must-read.”—Library Journal, starred review of Elizabeth and Hazel: Two Women of Little Rock

“Utterly engrossing, for it touches on a variety of thorny, provocative themes: the power of race, the nature of friendship, the role of personality, the capacity for brutality and forgiveness.”–Publishers Weekly, review of the same book

Please join us on Wednesday, October 23rd at a free REPAIR meeting with acclaimed journalist and author, David Margolick. The event will be held from 7:30-9:00 PM at Trinity Episcopal Church, Ossining.

Focusing on his book, Elizabeth and Hazel: Two Women of Little Rock; the author will describe how he has grappled with stories that reveal unknown sides of our nation’s fraught racial history. Elizabeth and Hazel is a study of the principal figures in the iconic photograph from the 1957 school desegregation crisis. This photo shows a White girl screaming at a Black girl entering Little Rock High School.

There will be an audience Q&A afterwards. Snacks will be served. All are welcome, no religious affiliation or belief needed.

David Margolick is a veteran journalist and author. For many years, he was a legal affairs reporter and columnist at The New York Times, for which he covered, among other stories, the O.J. Simpson trial. He’s also been a longtime contributing editor at Vanity Fair, where he’s profiled Tony Blair, Benjamin Netanyahu, and many others.

Some of his many other books include Strange Fruit: The Biography of a Song; and the most recent, The Promise and the Dream: The Untold Story of Martin Luther King, Jr. and Robert F. Kennedy. He has written for the New York Times Book Review, the New York Review of Books, the Wall Street Journal, the Washington Post, and the Guardian. He is currently writing books on Sid Caesar and Jonas Salk.

Rivertowns Episcopal Parishes Action on Inclusion and Race (REPAIR) is a community of Westchester citizens determined to play our part in bringing healing and justice to our society . . . starting with the local Episcopal churches in which many of us worship.

For more information: see REPAIR: Rivertowns Episcopal Action on Inclusion and Race on Facebook and our website at www.repairrivertowns.org.