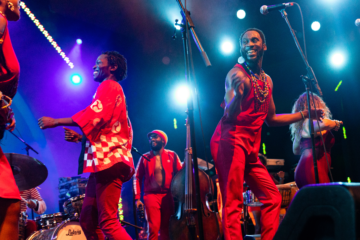 WHITE PLAINS, N.Y. – The 8th annual JazzFest White Plains features an impressive lineup of internationally renowned musicians spanning a weeklong celebration of jazz, culture and community from September 11-15, 2019. The five-day festival produced by ArtsWestchester, The City of White Plains and The White Plains BID is presented this year by Bank of America.

In addition to dozens of free and affordable concerts taking place throughout the city, headlining performances will include artists such as Mwenso & The Shakes, Camille Thurman, and Emmet Cohen with George Coleman and Jimmy Cobb.

JazzFest culminates during the White Plains Jazz & Food Festival from 12 noon to 5:30 p.m. on Sunday, September 15. Music and entry are free, with food and beverage vendors taking over Mamaroneck Avenue in front of the historic ArtsWestchester building. Five bands will grace the stage throughout the day, ending on a high note with the New Orleans sounds of two-time Grammy-nominated trumpeter Alphonso Horne and The Gotham Kings. Bring the whole family and spend the day, this is an experience you’ll want to relive all year long!

For more information or to purchase tickets, visit: artsw.org/jazzfest

• Nanny Assis Trio
Downtown Music at Grace Church | Noon | FREE
33 Church St
Bahia native Nanny Assis is a singer, drummer, percussionist and songwriter. He is a master of Brazilian Jazz, Afro-Brazilian music and other popular and folkloric sounds from his homeland.

o 5:30pm: Mediterraneo White Plains: 189 Main Street | 914-448-8800 |
Albert Rivera Quartet
Saxophonist Albert Rivera has toured North America and has played at venues such as the River Room in Harlem and Dizzy’s Club Coca-Cola at Lincoln Center. In 2009, he was the recipient of the ASCAP Young Jazz Composer Award.

o 6:30pm: Morton’s The Steakhouse: 5 Mamaroneck Avenue | 914-683-6101 |
Pablo Mayor’s Folklore Urbano NYC Trio
Pablo Mayor is one of the leading contemporary voices of Colombian music. His trio combines the native rhythms of Colombia, with Jazz, Salsa, and Cuban Charanga. The Folklore Urbano NYC Trio has been heard throughout the USA, including renowned venues across the NYC area, as well as Canada and Colombia.

• Jazz at Noon with Eunha So
White Plains Public Library Plaza | 12pm | FREE
100 Martine Ave
Pianist and composer Eunha So plays across genres, from classical to jazz. She has trained under several prominent artists including Eric Gunnison, Art Lande, and Pete Malinverni. She is a graduate of SUNY Purchase’s graduate program in Jazz Studies.

• Keyon Harrold
Outdoor Plaza at 5 City Place | 6:30pm | FREE
Keyon Harrold, who was raised in Ferguson, Missouri, was schooled in the straight-ahead jazz tradition. The trumpeter has been featured on more than one hundred jazz, R&B, hip-hop, gospel and blues albums, in addition to Miles Ahead, the Grammy Award-winning movie about Miles Davis. Harrold has recorded or performed with Gregory Porter, Prince, Jay-Z, Beyoncé, Mary J. Blige and many others. Rain location: City Center, 3rd floor lobby

• Pete Malinverni’s Jazz-Chester, feat. Ralph Lalama, Mike Migliore & Aaron Seeber
ArtsWestchester | 8pm | $25
31 Mamaroneck Ave
Pete Malinverni is Head of Jazz Studies at the Conservatory of Music at Purchase College. He has been a fixture on the New York City jazz scene since moving there in the early 1980s, and has recorded fourteen times as a leader in solo piano, trio, quartet, quintet, big band and choral contexts. During his time in NYC, Malinverni has recorded and performed with a host of masters, including Joe Lovano, Vernel Fournier, Charles Davis, Mel Lewis, Dennis Irwin, Jon Faddis, Karrin Allyson, Steve Wilson and many others.

• Kotoko Brass
White Plains Plaza, 1 N Broadway | 5pm | FREE
Kotoko Brass melds the traditional drum rhythms of Ghana, the sturdy bass and keyboards of the Caribbean, and the joyous horns of New Orleans to forge a new sound of its own. The band has shared the stage with Femi Kuti, the California Honeydrops, Vieux Farka Toure, Innov Gnawa, Take 6, the Boston Pops and more.

• Joel Ross ‘Good Vibes’ feat. Melissa Aldana | ($20 for 7:30pm | $35 for both 7:30pm & 9pm)
ArtsWestchester | 9pm
31 Mamaroneck Ave
Chilean saxophonist and composer Melissa Aldana has had a remarkably rapid evolution, from being a six-year-old sax prodigy to now being widely considered one of the most compelling tenor saxophonists on the scene. In 2013, Aldana became both the first female instrumentalist and the first South American to win the Thelonious Monk Competition. She is also a recipient of the Martin E. Segal Award from Lincoln Center and a double recipient of the Altazor Award, Chile’s prestigious national arts prize. Aldana has released four recordings as a leader. Recently, she premiered the commissioned suite, Visions for Frida Kahlo, before touring Brazil, Europe and Australia with her quartet.

• Emmet Cohen Quartet feat. George Coleman & Jimmy Cobb
White Plains Performing Arts Center | 8pm | $29 – $44
11 City Place
Recognized as a prodigy who began playing at age three, multifaceted American jazz pianist and composer Emmet Cohen has emerged as one of his generation’s pivotal figures in music. Cohen is the recent winner of the American Pianists Association’s prestigious 2019 Cole Porter Fellowship. In this performance, his ensemble will be joined by two of jazz’s greatest figures, George Coleman and Jimmy Cobb. Among countless accomplishments, Coleman was recognized as a National Endowment of the Arts “Jazz Master,” played in Max Roach’s band, was a member of the Miles Davis quintet with Herbie Hancock, Ron Carter and Tony Williams, and played on Hancock’s landmark Blue Note recording, Maiden Voyage. Jimmy Cobb made his name in support of Dinah Washington, Cannonball Adderley, Miles Davis, Wes Montgomery and Sarah Vaughan, and on hundreds of studio sessions. As the drummer on Davis’ legendary album Kind of Blue, Cobb may be the most frequently heard (if not the best known) drummer in jazz history.

• Art Bennett and The Organic Ensemble
1:05pm – 1:50pm
Saxophonist Art Bennett was born and raised in White Plains, where he first began studying jazz. Active in the “Loft Jazz” movement of the 1970s in New York City, he has performed with greats Lonnie Smith, Rashied Ali, Roy Brooks, Willian Parker, and many others.

• Camille Thurman with the Darrell Green Trio
3:20pm – 4:10pm
Camille Thurman is a “rising star” (Downbeat Magazine) who excels in both saxophone – from which energy soars, and vocals – from which she embraces a soulful dynamism and spirited “Fitzgerald-esque” (All About Jazz) scat. She has performed for audiences throughout the world.

• Alphonso Horne and The Gotham Kings
4:30pm – 5:30pm
Two-time Grammy nominated trumpeter, Alphonso Horne has put together a band that weaves the sound of New Orleans into a rich musical fabric that demonstrates the history of the trumpet and the story of jazz. Inspired by the music of King Oliver Creole Jazz Band, The Gotham Kings use the virtuosity of the young Louis Armstrong and innovative genius of King Oliver to take you on a journey of sound that encompasses rags, stomps, shouts and funk.

For more information or to purchase tickets, visit: artsw.org/jazzfest

For over 50 years ArtsWestchester has been the community’s connection to the arts. Founded in 1965 it is the largest private not-for-profit arts council in New York State. Its mission is to provide leadership vision and support to ensure the availability accessibility and diversity of the arts. ArtsWestchester provides programs and services that enrich the lives of everyone in Westchester County. ArtsWestchester helps fund concerts exhibitions and plays through grants; brings artists into schools and community centers; advocates for the arts; and builds audiences through diverse marketing initiatives. In 1998 ArtsWestchester purchased the nine-story neo-classical bank building at 31 Mamaroneck Avenue which has since been transformed into a multi-use resource for artists, cultural organizations and the community. A two-story gallery is located on the first floor of ArtsWestchester’s historic building on Mamaroneck Avenue.