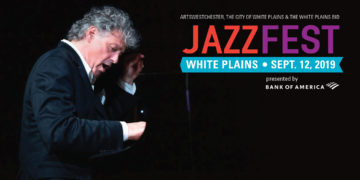 Pete Malinverni is Head of Jazz Studies at the Conservatory of Music at Purchase College and has graced stages across the city from The Blue Note to Carnegie Recital Hall. He has been a fixture on the New York City jazz scene since moving there in the early 1980s, and has recorded fourteen times as a leader in solo piano, trio, quartet, quintet, big band and choral contexts. During his time in NYC, Malinverni has recorded and performed with a host of masters, including Joe Lovano, Vernel Fournier, Charles Davis, Mel Lewis, Dennis Irwin, Jon Faddis, Karrin Allyson, Steve Wilson and many others.
Special Ticket offer to students with ID: $20.00 for Pete Maliverni’s Jazz-Chester at 8pm and JazzJam at 10pm – only available at the door.
________________________________________
The 8th annual JazzFest White Plains features an impressive lineup of internationally renowned musicians spanning a weeklong celebration of jazz, culture and community from September 11-15, 2019. The five-day festival produced by ArtsWestchester, The City of White Plains and The White Plains BID is presented this year by Bank of America.