Hulda: The Other Legend of Sleepy Hollow 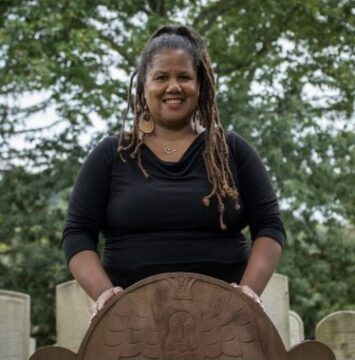 Once shunned as a witch, Hulda of Bohemia is now remembered as an 18th-century patriot and healer

Each fall, tens of thousands of people from around the world flock to Sleepy Hollow in Hudson Valley, New York to visit the burial ground made famous in Washington Irving’s 1819 tale, “The Legend of Sleepy Hollow”. In Irving’s tale of the Headless Horseman, a German soldier is said to return to the gravesite, in search of his head that was lost during America’s Revolutionary War.

The famous graveyard was also known for another resident, Hulda of Bohemia, a woman who lived in Sleepy Hollow during the 1770’s. In Edgar Mayhew Bacon’s 1897 book Chronicles of Tarrytown and Sleepy Hollow, he mentioned the woman whose basket weaving and healing abilities led to her being shunned as witch, while her skills as a sharpshooter made her a Revolutionary War hero.

Hulda’s story came into prominence after Jonathan Kruk’s 2011 book Legends and Lore of Sleepy Hollow and the Hudson Valley included a chapter on the “Witch of Sleepy Hollow. In 2019, The Old Dutch Church honored her with a Remembrance Service and a gravestone, which has become a popular visitor destination.

“Some people would come looking for the witch, especially at this time of the year, and those of us who knew her history felt it was important to give her proper recognition as a patriot, says Deb McCue, head docent of the Old Dutch Church. “For me, honoring Hulda also honors the memory of the nameless women who contributed to the Revolution as soldiers, spies, nurses, and cooks, as well as those who watched over their farms and families during those harsh and frightening times.”

This year, storyteller Carla Lynne Hall offers an updated narrative of Mother Hulda in “Hulda: The Other Legend of Sleepy Hollow”. “When Hulda’s gravestone was erected in 2019, I was fascinated with the story.” As her husband Jim Keyes was the daytime storyteller at the Old Dutch Church for its “Legend of Sleepy Hollow” event, she spent a lot of time exploring Hulda’s history. “I found myself retelling her story at her gravesite to anyone who’d listen.”

This led to Hall researching historical sources to determine Hulda’s possible origin story, as well fill in some of the blanks of her mysterious narrative. “Hulda: The Other Legend of Sleepy Hollow” is told from the perspective of Abby, an enslaved African girl who Hulda befriends at a time when both of them would have been forced to live on the edges of society.

“While our story of Hulda is fictionalized, we did incorporate the actual names of enslaved Africans who lived at Philipsburg Manor, and also built the Old Dutch Church of Sleepy Hollow, “ says Hall, “When writing the story, we felt it important to speak their names in the church they built, and may have also attended.”

Hall’s storytelling is accompanied by an original score performed by her husband, Jim Keyes. Based in Ossining, NY, they are an award-winning professional duo known as Carla and Keyes. Earlier this year, they performed “Ona’s Interview: The True Story of George Washington’s Runaway Slave”.

Historic Hudson Valley is a not-for-profit educational and historic preservation organization headquartered in Tarrytown, New York. Historic Hudson Valley was formally founded in 1951 as Sleepy Hollow Restorations by John D. Rockefeller, Jr., who was deeply interested in preserving places of historic importance. Rockefeller provided the funding for the establishment of Colonial Williamsburg, among other projects. Close to Rockefeller’s Hudson Valley country house were Sunnyside, the home of the celebrated writer Washington Irving, Philipsburg Manor, and Van Cortlandt Manor. He saw in all three the potential to educate the public about the history and culture of the Hudson River Valley and wished to assure their preservation and public access.

The Old Dutch Church of Sleepy Hollow, listed on the National Register of Historic Places as Dutch Reformed Church (Sleepy Hollow), is a 17th-century stone church located on Albany Post Road in Sleepy Hollow, New York, United States. It and its five-acre churchyard feature prominently in Washington Irving’s “The Legend of Sleepy Hollow”. The churchyard is often confused with the contiguous but separate Sleepy Hollow Cemetery.

Veronica Davis, Carla and Keyes
Reformed Church of the Tarrytowns