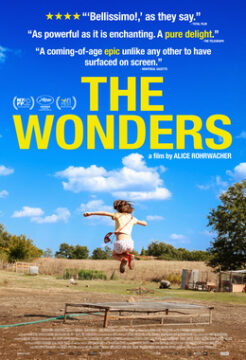 The Wonders (110 minutes) is a coming-of-age epic by Alice Rohrwacher, who based the film on her childhood memories of working with her three sisters on their parents’ Tuscan bee farm. This fantastical tale is told from the oldest daughter’s point-of-view and reveals her adventures of entering her family’s honey into a TV competition called Countryside Wonders. The film won the Grand Prix award at the 2014 Cannes Film Festival.