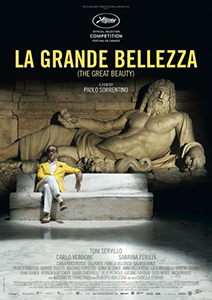 The Great Beauty (142 minutes) by Paolo Sorrentino is an art drama told from the perspective of a 65-year-old journalist and theater critic who wanders among various social events in Rome and reflects upon the beauty of the City’s history in contrast to its modern-day inhabitants. It won Best Foreign Language Film at the Academy Awards in 2014. In 2016, the film was ranked among the 100 greatest films since 2000 in an international critics’ poll; and The Daily Telegraph described it as “a shimmering coup de cinema”.