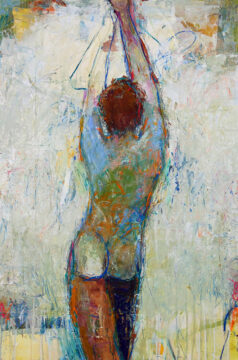 “A fusion of explorations rooted within the perspicacious mind of the artist and combined with a deep and insistent beauty.”
The arrival of the recent works of Jylian Gustlin is always a joyous affair. One can rely not only on a definitive maturation, as evidenced in her new and beautifully rendered works, but by Gustlin’s continuous broadening of both subject and her approach to surface. Her compositions are now more complex spatially, and multi-dimensional in effect. The sketchy quality of her figures and heavy drips of pigment allows the viewer to better experience the hand of this artist, as she attacks her surfaces with a savvy guilelessness and assured fluidity. Known for employing a resin as the final gesture to her works, Gustlin, now, on variant pieces, utilizes a matt or satin varnish overlay, and on others allows them to remain raw. These explorations in application rounds the oeuvre of her art, further enticing the viewer to engage in an enriching visceral experience.
Raised in the San Francisco area and shaped by the technology explosion of Silicon Valley, Gustlin brings a new sensibility to Bay Area figuration. With her background in computer science and mathematics, she has a heightened understanding of how studying patterns and layers enable her in laying down the bones of a painting, without being confined by it. Her works penetrate the void of its lonesome figure, allowing the viewer to merge deeper into the artist’s own ponderous world and painterly illusion. Her surfaces now are newly authored in uninhibited application – and exist outside the confines of form. They break outside the box with sumptuous pigments and unfettered application – often overlaid in Pollack-like drips and Twombly-like scribbles. There is an irresistible energy and new found confidence in her works.
Jylian is widely regarded and received, her works can be found in various collections, private and public – worldwide.