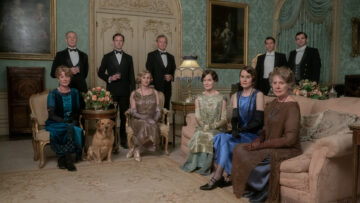 The much-anticipated next installment in the beloved hit film and television franchise finds the Crawley family taking a vacation to the South of France to shine some light on a decades-old family secret after the Dowager Countess, Violet Crawley (Maggie Smith, Gosford Park, The Best Exotic Marigold Hotel) inherits a villa from someone in her past. Meanwhile, the movies come to Downton Abbey when a film director—franchise newcomer Hugh Dancy (Hannibal, Martha Marcy May Marlene)—moves into Downton to shoot his next film in the titular house.