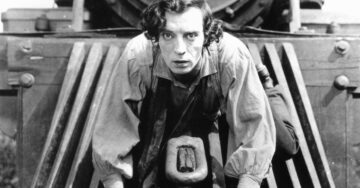 Screening of Buster Keaton’s The General, followed by a Q&A with film critic/author Dana Stevens, moderated by JBFC Senior Programmer Andrew Jupin. Many critics consider Buster Keaton’s The General to be the last great comedy of the silent era, and it consistently ranks as one of the greatest comedies of all time on international critics’ polls. Keaton portrays the engineer Johnnie Gray, who is rejected by the Confederate Army, then suffers the humiliation of his girlfriend (Marion Mack) thinking him a coward. When a small band of Union soldiers penetrate Confederate lines to steal his locomotive, Johnnie sets off in hot pursuit. Seven of the film’s eight reels are devoted to the chase, with its orchestration of thrills and comedy; Keaton shot the film on the narrow railways of Oregon, using less than 50 titles to tell the whole story. Featuring live piano accompaniment by Ben Model; preceded by a screening of Neighbors (1921). Dana’s new book Camera Man: Buster Keaton, the Dawn of Cinema, and the Invention of the Twentieth Century, will be for sale after the screening, courtesy of the Village Bookstore  .