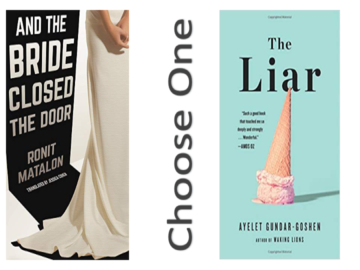 Temple Beth Abraham has a congregant-led book club which meets bi-monthly to discuss books with Jewish themes.
This month’s selection: Reader’s Choice. Choose one of the following Selections: The Liar by Ayelet Gundar-Goshen or And the Bride Closed the Door by Ronit Matalon

The Liar:
Nofar is a moody teenager, bored by her summer job at an ice cream parlor. One day a customer, dissatisfied with her service, insults her. In turn, she runs into the street and accuses the customer of sexually assaulting her. The question is, is Nofar telling the truth? Was she sexually assaulted or was she merely grabbed by her arm? “Nofar’s adventures in lying bring her into contact with a variety of other not-as-upstanding-as-they seem characters.” These latter characters and their talk seem difficult to resist, but the question is whether in the long run they make Nofar a better liar or a better person. As in Waking Lions, Gundar-Goshen’s book we have already read, the question is whether good people can become entwined in immoral and criminal behavior or extricate themselves from bad situations before it is too late.
And the Bride Closed the Door:
As the story opens, the bride has locked herself in her room and refuses to come out. Hysteria abounds as her mother, the bridegroom, and the prospective in-laws try to get the bride to explain herself and her odd behavior. What becomes clear is that their concerns are not so much for the bride, but rather for themselves. How do they save face and money in this dilemma? What will they tell the guests? What about all the money already spent and now to be lost? While the groom considers why the bride has locked herself in and what is the real purpose of marriage, the parents think of ways to break through the locked door. Other family members offer suggestions. Eventually, the bride slips a note under the door to the groom. What did she say? The last novel of the author, who died at the age of 58 in 2017, this story is by turns laugh-out-loud funny and tragically sad.

Whether the book club will meet in person or via Zoom is dependent upon COVID-19 protocols and the status of the construction at TBA.
Email adulted@tba-ny.org or check the website, bit.ly/TBA-Adult-Ed, for more information. Requests for the Zoom link should be made by May 10 at noon.