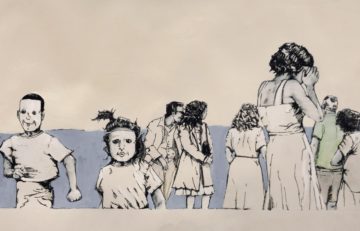 Please join us for the opening reception of SSKB’s latest taproom art exhibition, featuring artist Aron Johnston. Get a chance to chat him up while being the first to view his show titled, “Meanwhile, all along.” This event is free and open to the public. Complementary light bites will be served.

— Artist Statement —
The title for my show, “Meanwhile, all along,” is derived from a narrative plot device suggesting that while one thing unfolds, another seemingly unrelated event transpires simultaneously. Similarly, my drawings tell multiple overlapping stories that always keep the viewer guessing.

I’ve deliberately included a wide range of work in order to provide insight into the scope and diversity of my practice. Yet there are commonalities among the drawings on display. First, they always reference physical, social, and/or psychological events. Second, they all result from a process I call “image mining”: the recycling and adaptation of found images. Generally speaking, I combine multiple, unrelated images in the same work in order to heighten the sense of humor, absurdity, and psychological charge.

I think of art as a kind of linguistic endeavor. It is a language not unlike math, chemistry, or music. Sometimes, in order to tell a story, it is as simple as manipulating the basic units of that language: in the case of visual art, circles, squares, and triangles. I manipulate these building blocks in order to make meaning and tell stories, including the story of how the drawings were created. For me, the act of making art is the primary narrative I want to convey to the viewer.

— Artist Bio —
Aron G. Johnston has exhibited in California, New York, New Jersey, Pennsylvania, and his home state of Texas as well as in India, Italy, and Kuwait. He earned his M.F.A. from the University of Texas in 2007. He received a Fulbright Research Grant that same year, which he used to study the social effects of globalization on traditional sign painting in southern India. He has been a visiting professor at Moravian College in Bethlehem, Pennsylvania, and Director of Art Education at One River School of Art. Aron now teaches privately to individuals and small groups in Ossining, NY, where he lives with his wife Kelly Baum and daughter Alice. For more information about Aron, his work, art commissions, and the variety of art services he provides, please visit Aronjohnston.com or email at Aronjohnston@gmail.com