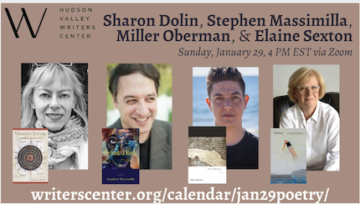 Join us on Zoom as we welcome Sharon Dolin, Stephen Massimilla, Miller Oberman, and Elaine Sexton as they read from their latest poetry collections.

Sharon Dolin is an award-winning American poet, translator, essayist, memoirist, and aphorist, who teaches poetry workshops in New York City and Barcelona, Spain. She is the author of six poetry collections, most recently Manual for Living (University of Pittsburgh Press, 2016) and Imperfect Present (October, 2022) by the University of Pittsburgh Press. The recipient of a 2021 NEA Fellowship in Translation, she lives in New York City, where she is Associate Editor of Barrow Street Press and directs Writing About Art in Barcelona.

Stephen Massimilla is a poet, scholar, professor, painter, and author, most recently of the poetry collection Frank Dark (Barrow Street Press, 2022) and the anthology Stronger Than Fear: Poems of Empowerment, Compassion, and Social Justice, coedited with Carol Alexander. His multi-genre Cooking with the Muse (Tupelo Press, 2016), coauthored with Myra Kornfeld, won the Eric Hoffer Award and many others. Previous books and awards include The Plague Doctor in His Hull-Shaped Hat (SFASU Press Poetry Prize); Forty Floors from Yesterday (Bordighera Poetry Prize, CUNY); The Grolier Poetry Prize; the Van Rensselaer Prize, selected by Kenneth Koch; a Salmon-Run Press Book Award citation, selected by XJ Kennedy; a scholarly study of myth in poetry; numerous Pushcart Prize nominations; award-winning translations; and others. His work has been featured recently in such publications as AGNI, Barrow Street, the Chicago Tribune, Colorado Review, Denver Quarterly, Epoch, Five Points, Green Mountains Review, Gulf Coast, HuffPost, The Literary Review, The Los Angeles Review, Poet Lore, The Southern Review, Tampa Review, Poetry Daily, Verse Daily, and hundreds of others. Massimilla holds an MFA and a PhD from Columbia University and teaches at Columbia University and The New School. He has exhibited his art in several cities, been interviewed on radio and television, presented papers at numerous conferences, and performed his work at venues ranging from The Miami Book Fair to Carnegie Hall.

Miller Oberman is a former Ruth Lilly Fellow as well as a 2016 winner of the 92nd St Y’s Boston Review/ Discovery Prize. His translation of selections from the “Old English Rune Poem” won Poetry’s John Frederick Nims Memorial Prize For Translation in 2013. Miller’s first book The Unstill Ones, a collection of poems and Old English translations was published in September 2017 by Princeton University Press. He lives in Brooklyn with his wife and holds a PhD in English from the University of Connecticut.

Elaine Sexton’s latest collection of poems is Drive (Grid Books, 2022), Her three previous books of poetry are: Sleuth (New Issues, 2003), Causeway (New Issues, 2008), and Prospect/Refuge (Sheep Meadow Press, 2015). Her poems, art reviews, book reviews, and works in visual art have appeared in journals and anthologies, textbooks and websites including American Poetry Review, Art in America, Poetry, O! the Oprah Magazine, and Poetry Daily. Her recent iPhone pics have been included in the Carriage Trade gallery’s annual Social Photography exhibition, NYC. An avid book maker and micro-publisher, she is the author of several chapbooks, and has curated site-specific events with accompanying limited-edition chapbooks, and periodicals, among them Hair and 2 Horatio. She teaches text and image and poetry at Sarah Lawrence College and has been guest faculty at New York University and in the graduate writing program at City College (CUNY). Formerly a senior editor at ARTnews and visual arts editor for Tupelo Quarterly, she serves as a contributing editor for On the Seawall, and is a member of the National Book Critics Circle.