A local Photographer’s Perspective of the New Tappan Zee Bridge 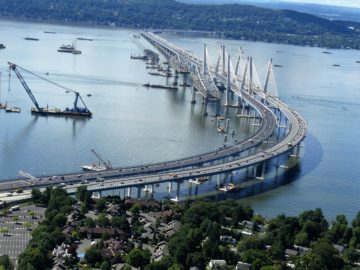 As an award winning photographer of the scenic Hudson Valley and beyond, Mr. Rocco has photographed some of the most important and historic restoration projects in the Hudson Valley Region. He is currently known for his stunning pictorial essay documenting the construction and completion of the new Tappan Zee Bridge/ Gov. Mario Cuomo Bridge. These photos have been exhibited recently at the Shrub Oak Library, the Warner Library in Tarrytown, the White Plains Library and street festivals in Sleepy Hollow and Nyack. Additional exhibits are scheduled for this year, and Mr. Rocco plans to continue his unique photo coverage—on land, by water and by air. In January, Mr. Rocco successfully captured the controlled demolition of the remains of the original east anchor span of the original Tappan Zee Bridge.
A number of his photos that were published in 2016 and 2018 were considered for a Pulitzer Prize in Photography pertaining to the category of “Local News.” Over the years, his photo work has been published in a wide variety of noted publications, and his photo images on the “Damage and Destruction of “Hurricane Sandy” have been exhibited at the Arts Westchester Gallery in White Plains and The Museum of the City of New York. Some of these have been entered into the New York City permanent records. Mr. Rocco also participated in Arts Westchester’s 50th anniversary exhibition.