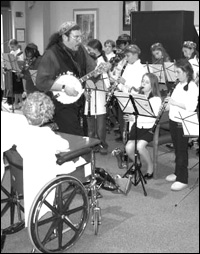 Cantor Margot Goldberg was intrigued when a congregant suggested starting a Klezmer music program at Tarrytown’s Temple Beth Abraham. Temple Beth Abraham has a rich musical history, including its annual Purimspiel, a light-hearted annual performance in celebration of the late winter Jewish festival of Purim.

A program for traditional Eastern European dance music would only enhance the musical heritage at the synagogue. “Without a second thought, I contacted the music director of the Westchester Klezmer Program, Kenny Green, and invited him to form two bands here in Tarrytown, one for students in fifth through seventh grades and the other for teens and adults,” says Cantor Goldberg. “The program introduces our youngest musicians to a genre of music they might otherwise not have been interested in and gives all musicians an opportunity to bring joy to those they play for.” Band members play in nursing homes, synagogues, and programs for developmentally disabled adults.

Jerald Seti, a Dobbs Ferry father of two, tuned up his clarinet and joined Klezmerica, the band for teens and adults, along with his son Eric, a 10th grade student. Jerald explains that “My perception of klezmer was that it was played by older men at parties. The opposite is true – contemporary Klezmer music is influenced by rock, jazz, fusion, and lots of different music styles. It’s a lot of fun.”

Jerald also volunteers as coordinator of the Tarrytown program. “I hope that every child in the program will develop a love for this music which they will carry in their “Jewish backpack” for their entire life. Cultural identity is important and Klezmer music may ‘strike a chord’ with many kids.”

Evan Seti, Jerald’s younger son, plays with the elementary/middle school band, The Tarrytunes. “I am doing a mitzvah (good deed) when I bring joy to the people in our audience,” explains Evan, whose band participation fulfills a community service requirement for his bar mitzvah.

Both bands continue to welcome new members of all ages. Josh Davidson, an adult member of Klezmerica, hadn’t played his saxophone in the 18 years since his college days ended. “Kenny Green is an exciting band leader who eases rusty musicians back into playing while challenging their talent at the same time. I hope that other adults will think about dusting off their instruments, tuning up and joining the program. ” The Westchester Klezmer Program began in 2001 with seven 5th and 6th grade musicians at Bet Torah in Mount Kisco. Under the musical direction of Kenny Green, the Program has grown to five bands and over 75 band members. Band rehearsals are held at Temple Beth Abraham and at Temple Shaaray Tefila in Bedford Corners. The Program is hosting its third community performance, KlezFest!3: “Battle” of the Klezmer Bands, on Sunday, March 26th, 2:30-5:00 pm at Congregation Sons of Israel in Briarcliff Manor. The Tarrytunes and Klezmerica each will play a set, as will the Program’s three Northern Westchester bands – Shpritz, Two Cents Plain, and Egg Cream. Dancing will be led by Lisa Mayer and Sruli Dresdner of Oy Vey Klezmer. Advance purchase tickets are $18, $10 for seniors and children under 13 years. For information, visit www.klezkidz.org or call 914/244-3885.

About the Author: Mindy Hermann Zaidins